Yesterday the South Carolina State Assembly finally agreed on a vote to take down the confederate flag from the State House. Although it took the murder of a fellow State Senator in a church to create the political will to get this done, it is a welcome change, and one that has the potential to both improve race relations and possibly even reduce racial health inequalities.

Symbols are powerful. They are intended to be. They convey subconscious meaning. They stir emotional responses and can awaken dormant, even unconscious, attitudes and reactions. Symbols play an important role in the political socialization process. Theories of symbolic politics suggest that early in life standing predispositions are formed, which influence adult perceptions and attitudes. In adulthood, people respond in affective ways to symbols that resemble the objects to which they had similar emotional responses early in life, which can trigger long-held, emotional responses. This is why countries with a painful, colonial past change street names, create new flags, exchange statues in public squares. It is part of a process of reclaiming of identity.  While some might argue that more tangible policies like reparations and reform of policing and incarceration practices would do more to further race relations, because of its powerful impact on the political socialization of the next generation, removing the flag is an important step towards creating a more tolerant nation. 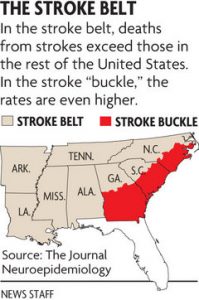 In addition to their role in political socialization, symbols may have an under-appreciated and profound effect on health. Blacks in the U.S. are 2-4 times more likely than whites to develop hypertension by age 50 and 3-4 times more likely than Whites to suffer a stroke and this risk is only partially reduced once differences in socioeconomic status are accounted for leaving large unexplained racial inequalities in health outcomes. In the U.S., there is a visible geopolitical divide in a number of health outcomes with the worst health outcomes for heart disease, stroke, and infant mortality concentrated in the Deep South. The Mason-Dixon line does not only mark a change in cuisine and culture, but also a stark division in health outcomes. Some have suggested that psychosocial stress pathways may at least partially account for these persistent disparities. Studies over several decades have found that “high effort” coping with difficult psychosocial stressors produce substantial increases in heart rate and systolic blood pressure. These increases persist as long as individuals actively work at trying to eliminate the stressor. According to this theory, unrelieved psychosocial stress, generated by environments in which Blacks live and work, may be largely responsible for African-Americans’ higher susceptibility to heart disease and stroke.

Regardless of how whites may view the confederate flag, its presence bears a constant reminder of race-based inequality and hate to African-Americans forced to gaze upon it day in and day out. Though perhaps only one step towards mending the inequalities of the present and harms of the past, its removal could have a profoundly tangible impact on the everyday stress that its presence invokes in bystanders.