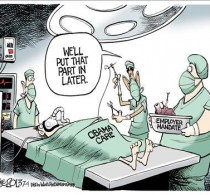 Please get mad that the Treasury Department is delaying the mandate that employer’s buy insurance for their employees (sometimes).

While, I am no fan of the Affordable Care Act, more is at stake here. Our political system is built on the rule of law. Process matters more than policy. (If you doubt this, take a second to think about our unintelligible policies on immigration, punishing criminals and healthcare, to name just a few.)

If the Executive Branch has the power to delay a law – passed by Congress, signed by the President – what can’t it do. Now, if a President wanted to make the argument the law was unconstitutional i.e. a violation of our most fundamental law, that would be one thing. But the idea that a portion of the ACA is inconvenient for businesses, or that insurers need more time to upgrade their software before out-of-pocket spending caps can be enforced, may be unpleasant. Fine, but who cares. It is the law.

Many predicted the ACA would be just this kind of unpleasant and worse. But we were outvoted.

The Urban Institute estimates that only 336,000 people won’t get health insurance because of the employer-mandate delay. (Sidenote: if lack of insurance really kills, how can we be so cavalier about this?)

The institute also reports the federal government will miss out on $3.7 billion in revenue. Now this is a crucial point. Some senators voted for the ACAbecause it was deficit neutral (on paper, anyway). If the employer-mandate revenue was part of that calculation, we are adding more than a dime to the deficit and no longer being true to the intentions of these senators.

In this particular case, perhaps no one is going to complain. If senators didn’t know in advance that the ACA would add far more than $3.7 billion to the deficit, I don’t know what to say. (Paul Ryan does.)

A broken political process will only hurt the causes we care deeply about, from health equity to fairness and equality more generally. It is only a government bound by law, rather than above the law, that can bring about a more fair and equal country.