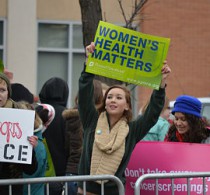 Folks – today is the 39th anniversary of Roe v. Wade.

While the debates for the Republican Presidential primary continue to stoke the flames of dispute about the human right for universal healthcare, it’s time to pause and reflect on an important human right that was reaffirmed on this date, 39 years ago, in the historic ruling ofRoe v. Wade – specifically the right to privacy regarding the medical decision whether or not to have an abortion.

On January 22, 1973 the U.S. Supreme Court handed down its ruling in the landmark Roe v. Wade case. This historic ruling reiterated that individuals, not politicians, should have the right to make their own medical decisions – medical decisions are private decisions that should occur between the patient and doctor.  More narrowly, the decision ensured that the right to privacy in the U.S. Constitution permits a woman to choose whether to continue a pregnancy or to have a safe and legal abortion.

In fact, Connecticut has a proud legacy linking it to the landmark Roe v Wade decision.  Specifically, the Supreme Court ruled in Griswold v. Connecticut, that the Constitution protected a right to privacy which was subsequently cited in the Roe v. Wade decision.  The Court ruled that a women’s choice to have an abortion is protected as a private medical decision between her and her doctor.

Now, 39 years later, lawmakers are using women’s health as a diversion from the real problems facing Americans over the course of this past year, and yet the Roe decision survives despite persistent attack from opponents.  In 2011, anti-women’s health politicians across the country worked tirelessly to undermine Roe and jeopardize access to safe and legal abortion care along with access to family planning.  In fact, according to the Guttmacher Institute, (@Guttmacher), in 2011, state legislatures passed more than triple the number of abortion restrictions than in 2010 — the highest ever.  Twenty-four states enacted 92 new abortion restrictions in 2011, shattering the previous record of 34 adopted in 2005.

And last year, right here in Connecticut, legislation was proposed to “defund” Planned Parenthood – an attempt to align Connecticut with the most conservative states in the Nation.

Thankfully, swift action by several legislators who recognize the value of the medical care provided by Planned Parenthood quashed the proposal immediately.  “To propose cutting these funds is a contradiction for those who often complain about social issues,” Speaker Donovanstated. “Women must continue to have access to services that help them make decisions concerning their family planning.”

In truth, polling consistently shows that a majority of Americans support Roe and respect the decision each woman makes about her own reproductive health and pregnancy.  Yet, clearly this right for privacy in making a medical decision is in continual jeopardy.

Today, mark the anniversary of this momentous decision by joining the Since Roe campaign to remind Americans of the crucial difference the decision has made in women’s lives.  Use#becauseofroe to provide your own reason for supporting decision of Roe v Wade and #roe for general tweets about the anniversary.

As we work to address the significant disparities in healthcare, let’s not lose the important ground we already made in healthcare, specifically the right to privacy in our medical decisions, including abortion.