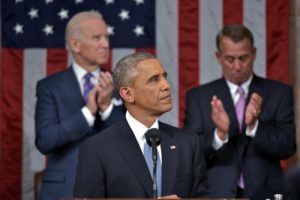 In his much talked about State of the Union Address, President Obama finally owned his signature health care law by pointing to two of the biggest achievements of the Affordable Care Act so far:

First, that in the past year, ten million uninsured Americans gained health coverage.

Second, that health care inflation is at its lowest rate in fifty years.

These are both important accomplishments no doubt, but more importantly for advocates of universal health coverage, Obama embraced what he termed “middle class economics”.  This was an important step in stating in clear terms a Democratic platform targeted squarely at the middle class – the median voter – who in theory should be supportive of universal coverage.

Why is embracing middle class economics important for proponents of universal health coverage?

What most conservatives disparage about government spending is the perception that it benefits the so-called “undeserving poor”: people who do not work and receive “hand-outs” from the government. In reality, the majority of public spending actually benefits the middle class. Medicare and Social Security together form 37% of the Federal Budget and are “universalistic” programs that equally assist middle income earners as low income earners.

A universalistic program is a program that everyone pays into and everyone receives benefits from, regardless of income. The wealthy benefit least from these programs because they have the financial resources to pay for health care and retirement even without these benefits.  However, it should be noted  that the wealthy also contribute less than their fair share to these programs because of caps on taxable income and the flat rate of taxation. Tax credits for home ownership and child care are also major supports to middle income earners, providing much needed fiscal relief, though are not generally perceived as social welfare or hand-outs (even though strictly speaking they really are).

Ironically, although these programs most beneficial to the middle class and are extremely popular, they have been among the hardest to expand.  For instance, more universalistic health reform policies like dropping the Medicare eligibility age to 55 from 65 and introducing an option for anyone to buy into Medicare (the “public option”) were both dropped from the Affordable Care Act before it was passed.

Although the ACA can tout a number of accomplishments like reducing health care spending and expanding coverage, the ACA only makes insurance more affordable for middle class families buying on the individual market up to 400% of the federal poverty line- that is, for a four person family with household income up to $94,000 a year.  Thus, the ACA is still a means tested program- families that make just above the 400% FPL level have to pay the full cost of insurance and it does nothing for families that do not get insurance through the individual market

This is the dirty secret that the Republicans do not want most voters to understand- universalistic programs primarily help the middle class. To vote for reduced government spending is a vote against one’s own pocket book.

This is in spite of the fact that an increasing amount of research has shown that economic insecurity is not reserved for low-income earners, but rather is rising among workers of all stripes including middle class workers. Middle class economics is about restoring economic security to the middle class through universalistic programs.

While it is great to see the President finally having the courage to take ownership of his signature health care plan, it is even more heartening to see him laying the groundwork for even more progressive reform.